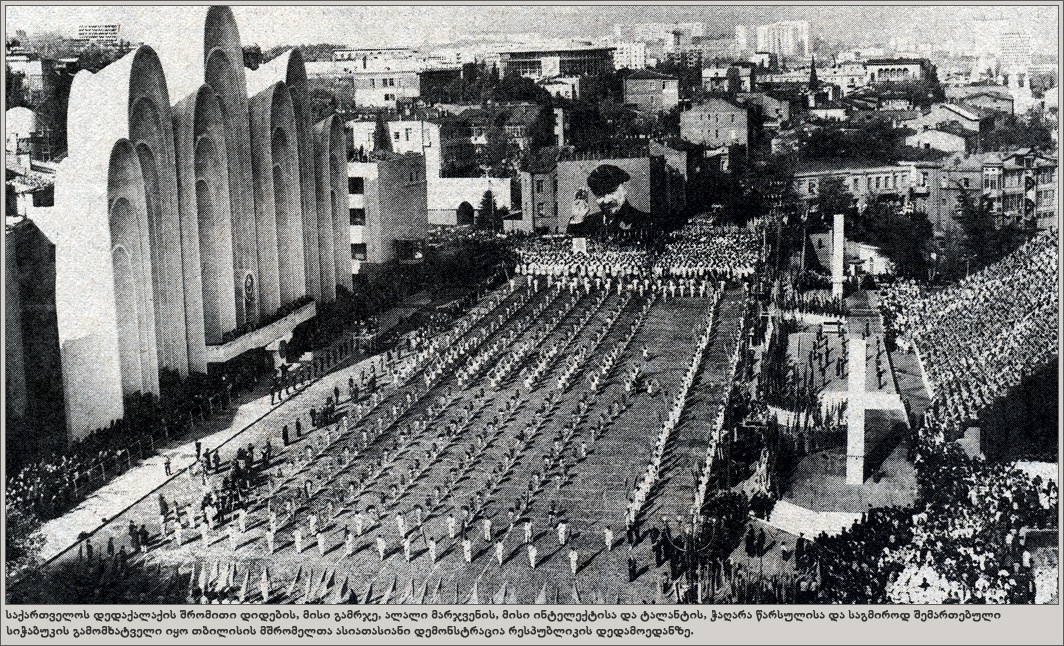 Baku and the Soviet Heritage: Memory and Oblivion

The collapse of the Soviet Union launched the search for a new identity and the creation of new narratives in Azerbaijan just as in the entire ex-Soviet space. We cannot cover all aspects of the memory politics in Azerbaijan during and after the Soviet period in a single article. Instead, we highlight the most significant sites of the Soviet memory landscape of Baku and their post-Soviet transformations within the new politics of memory. Immediately after the Sovietization of Azerbaijan, the urban development of Baku took a Soviet turn. In September 1920, the special committee on the development of city gardens in the Absheron peninsula created a plan on changing the appearance of the city. It included the development of the English Park in the place of the Chemberkent cemetery[1]. Later it became part of the Nagorny[2] Park.

In 1939, the Nagorny Park took the name of Sergey Kirov, a prominent political figure whose death of at the end of 1934 had made him one of the central heroes of the politics of memory of Soviet Azerbaijan[3]. Kirov’s monument was installed in the Nagorny Park as the latter dominated the panorama of Baku with a view on the bay. Kirov’s massive figure raising his hand over the city was placed at the center of a memorial that remained a prominent landmark of Baku until the collapse of the Soviet Union (Bertanitski 1971, 138-140).

The design of Baku’s new central square began with the construction of the House of the Soviets (“Dom Sovietov” in Russian) or the Government House. Intended to accommodate large-scale events and serve the purpose of an ideological center, the square was the largest one in the USSR at the time of its completion (Bertanitski 1971, 146-149). The construction of the House began in 1930 and was completed in 1952. According to the architects of the House, the exterior of the building was designed in the Baroque style, using also elements of the national Azerbaijani architecture. This style was reflected in the three rows of columns located along the edges of the building, the prototype for which was the colonnade of the reception hall of the medieval Shirvanshah palace in Baku. The construction of the adjacent Lenin Square ended in the Fall of 1951. It became an ideal location for military parades and demonstrations of workers. The first large-scale event took place on November 7 of 1951 on the commemoration of the October Revolution of Bolsheviks.

The House of the Soviets itself was designed as a “memorial-building” dedicated to the “father of the revolution” Vladimir Lenin. His monument was installed in the square on November 6 of 1954. For many years, the expressive 11-meter bronze sculpture of Lenin, the leader of the proletariat, portrayed at the time of addressing the people, was the central element of the whole complex. The last Soviet demonstration in the square took place in May 1987. The mass rallies in the following years went down history as the events that contributed to the collapse of the USSR.

The dirt shone red-orange in the car headlights, the road little more than a trench cutting through endless miles of dry terrain. Night had caught us by surprise, still hours from our destination. We sped through the moonlit wilderness, one single light in a rocky land dotted with pylons, ruined churches, and every few miles or so, looming ghostlike out of the darkness, the vestigial remains of Armenia’s Soviet monuments.

Somewhere near the village of Dashtadem, down in the southwest corner of Armenia, we lost the road altogether. The tarmac, half hidden under dust, took a sudden, sharp turn to the right while we carried on straight ahead. The car shuddered into the dirt, bouncing to a violent halt; and the small halo of light that had surrounded us erupted into a glowing cocoon of dust and smoke.

Nearby, an invisible siren whooped. In all these empty miles we had managed to plough into the verge just a stone’s throw from a police patrol car (I wondered how long it had waited there, like a trapdoor spider, for anyone to pass), and now we were due for a reckoning.

As one officer leaned down to the driver window, we told him we didn’t speak Armenian. We might have just about got by in Russian, but we told him – in English – that we didn’t speak that either. We assumed that the harder we made this, the more likely the police would just send us on our way… and it worked, though not without one final test to pass.

This Armenian police officer motioned the driver to get out of the car, then he cupped his hands and mimed a gesture of breathing into them. Our driver – an American – did as he was told, he emptied his lungs into the man’s palms and the officer took a good hard sniff. If he’d been expecting vodka breath, he was pleasantly surprised: we weren’t drunk, just tired.

As we reversed back onto the road the two police officers had a good laugh at our expense. They waved us off, muttering something that I can only guess meant “Stupid tourists.”

Armenia has an incredible number of monuments, and many of those that stand today were built between 1922 and 1991 in what was then known as the Armenian Soviet Socialist Republic. According to Garnik S. Shakhkian, author of the 1989 collection Architectural Monuments in the Soviet Armenia, more than 40,000 such structures were built.

The Aesthetics of Politics and Yerevan’s Statues

The state has a monopoly on building monuments and erecting statues in public spaces and each one comes with a message and benefits the rooting of a particular ideology that serves the state at the time of its installation.

If we look at how many monuments have been erected in Yerevan and how many were dismantled, how many were moved or altered, we’ll have an extensive overview of the  political currents and ideological tendencies that swept through the country since independence.

As per the list provided by Yerevan Municipality to EVN Youth Report, 51 statues and busts were erected in Yerevan since independence in 1991, excluding 2005-2006, when none were erected. These statues were the images of men — characters from novels, films (Men), artists (William Saroyan, Arno Babajanyan …), military figures (Garegin Nezdeh, General Antranik, Marshal Baghramyan …), philanthropists (Alexander Mantashev, Calouste Gulbenkian…). There is only one statue of a woman, “Armenuhi” which is a collective image of the Armenian woman, not commissioned by the state but rather retrieved from the artist’s studio by her granddaughter in 2009. The majority of these statues are in the center of Yerevan.