Harsha Ram (University of California, Berkeley) held this lecture on “The Scale of Global Modernisms: Imperial, Regional, National, Local” during the Annual Conference “Global Modernisms: Contiguities, Infrastructures and Aesthetics”, 5 – 7 November 2015, at the Haus der Kulturen der Welt in Berlin. The Conference was organized by the Forum Transregionale Studien and the Max Weber Stiftung in cooperation with the Haus der Kulturen der Welt and convened by Art Histories and Aesthetic Practices. 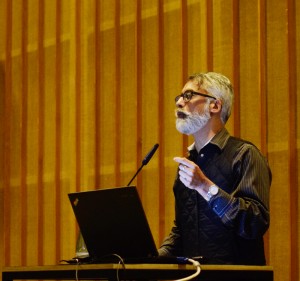 One of the principal challenges facing the study of global modernisms, as of any properly supranational cultural phenomenon, is the question of scale. Current theories of world modernism, generally neo-Marxist or Wallersteinian in inspiration, assume a vision of the world as “one and unequal” (Franco Moretti). In tracing the convergences of the global and the local, prevalent theories of world literature assume a model of hierarchical mediation, based on an initially posited spatial distance between core and periphery which is then mitigated through contiguous contact and infrastructural support. Alternatively, the dialectic of the global and the local is mapped onto the competing spatial logics of the marketplace and the nation-state. Both approaches have the genuine merit of acknowledging the operative inequalities of the modern world system, from the nineteenth-century imperial division of the globe to the resistances engendered by anti-colonial nationalism and socialist internationalism. Nevertheless, these theories can and have been faulted for their linear historicism (reducing modernity to modernization) and their spatial diffusionism, whereby the West is seen as the sole motor of cultural change. The explanatory power of theories of world literature, then, derives in large part from the perceived capacity of the Western metropole to impose the territorial logic of the nation and the deterritorializing logic of market exchange onto the rest of the world. Can other stories be told?

In this lecture Harsha Ram seeks to examine both core/periphery and circulatory models of world modernism, while insisting on the local (urban) and the transregional as alternative models by which to conceive modernist cultural practice. He focuses on the city of Tiflis (Tbilisi) in “Russian” Transcaucasia during the Russian revolution. With the collapse of the Russian, Habsburg and Ottoman empires, the peoples of the South Caucasus were able briefly to overcome their peripheral status, insisting at once on political emancipation and cultural modernization while tapping into older regional legacies that predate the modern world system.

Harsha Ram is Associate Professor of Slavic Languages and Literatures and Comparative Literature at the University of California, Berkeley. His primary fields of specialization are Russian and European literature, comparative romanticisms and modernisms. His theoretical interests encompass historical poetics, world literature, crosscultural encounter, and the problem of situating cultural production between the local (urban), the national, the imperial, and the cosmopolitan. He is the author of The Imperial Sublime. A Russian Poetics of Empire (2003), and is currently completing a second book entitled City of Crossroads. Tiflis Modernism and the Russian-Georgian Encounter.